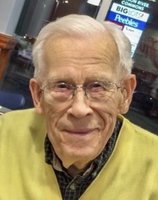 Born, raised and educated in the Glens Falls area, he was the son of the late Almer Byron and Marion Dantz Baker, Sr.  He was a graduate of Glens Falls High Scholl, Houghton College and he received his Master’s Degree in Math from Union College.  He taught mathematics in Port Jervis for five years and then at Brittonkill Central Schools for twenty-three years, where he also served as head of the math department and from which he retired in 1981. Following his retirement from teaching, Mr. Baker was a self-employed contractor for many years in the Capital District.

Mr. Baker was a veteran of WWII, having served in India with the 25th Weather Squadron of the US Army Air Corp.

He also served in the Fort Orange/Uncle Sam Council of The Boys Scouts of America as a Cub Master and as Camp Director for Camp Rotary.

He was a member and elder of the Loudonville Community Church where he also had served as Superintendent of the Sr. High Sunday School Class, a Bible teacher for the Jr. High Classes and served as Captain of the Christian Service Brigade.  He was a member of the Albany Camp of The Gideons International, having served in most offices as well as on the NYS Cabinet.

In lieu of flowers, the family requests that any remembrances for Al Baker be made through the GideonCard Bible Plan, to: ‘The Gideon International’, P.O. Box 743, Troy, NY 12181.

Funeral arrangements have been entrusted by the family to the Morris-Stebbins-Miner & Sanvidge Funeral Home, 312 Hoosick St., Troy, NY 12180.

Please feel free to express your on-line condolences or share a memory by using the “Condolences” tab on this website.