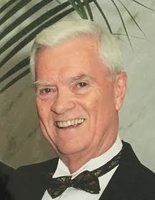 Francis T. “Frank” Martin, 82, formerly of Clifton Park, peacefully entered into eternal life on Thursday, May 14, 2020 at the NYS Veteran’s Home at Montrose in Cortlandt, NY. Born in Albany, NY, he was the son of Thomas F. and Ann M. Rafferty Martin and the beloved husband of Loris K. Schroeder who he married on October 27, 1962 at St. Joseph’s Church in Albany. He was a graduate of St. Joseph’s Academy, Class of 1955 and Siena College, Class of 1959 where he earned his BS in Finance. Mr. Martin honorably served in the U.S. Army from 1960 to 1962 as a 1st Lieutenant and was decorated with the Army Commendation Medal. Frank retired on Mach 31, 1997 and again on December 31, 2002 after 40 years of service with the IBM Corporation where he was a Program Manger in Poughkeepsie, East Fishkill and Armonk, NY. Mr. Martin’s hobbies and interests included camping, sailing, swimming, singing, golf, watching grandchildren’s events and traveling the world with Loris and other family members and friends. He enjoyed playing the Bodhran at Irish Sessions in the Capital Region, and being a tour guide of the Capital buildings. He also remained very active in the Siena community. He was a Citizen of Ireland through his ancestry. While residing in Clifton Park, Frank was a communicant of St. Edward the Confessor Church. He is survived by his beloved wife Loris of over 57 years, his devoted children; Thomas (Leslie) Martin, Donna E. (Joseph) McCrudden, Sheila A. (Robert) Sincero, Carol A. (Carson) Jacobs and Tracy E Martin, his brother Vincent DePaul Martin and wife Alma, brother-in-law Joseph Ketzer, loving grandchildren, Luke and Ethan, Kailey, Ryan, Martin and Tara, Robert and Jessica, Meghan and Carson, Nicole and Alex, Justine, Brendan, and Liam, adored great grandson Braxton and also survived by his cherished nieces and nephews. He was predeceased by his sister Lois A. Ketzer and nephew Joseph Martin. Those desiring, may make memorial contributions to Siena College… Siena College Development and External Affairs 515 Loudon Rd. Loudonville, NY 12211 In memory of Francis T. “Frank” Martin class of ‘59 Private immediate family visitation will be held at the Gordon C. Emerick Funeral Home, 1550 RT-9 (Halfmoon) Clifton Park, NY 12065 followed by burial at the Gerald B.H. Solomon Saratoga National Cemetery in Schuylerville. Please feel free to use the "Condolences" drop down tab on this website to express your on-line condolences or share a memory with the family.