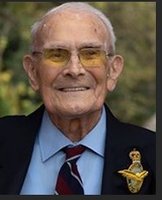 John Arthur Matthews peacefully passed away, surrounded by his family, on Saturday, July 25, 2020, at the age of 92. Born in London, England, he was the son of the late John Henry and Ernestine (Craddock) Matthews. John was raised in Rugby and entered the Royal Air force near the end of WWII. John met the love of his life, Lilian (Douglas) Matthews in a dance hall and they were married in 1952. They moved to the United States in 1953 and lived in Tuxedo, NY. The family then moved to Troy and eventually settled in Menands, NY where John was working as the Caretaker for the Sage Estate. They raised their 3 children on the Sage Estate/Albany International Headquarters until 1994 when he retired and they moved to St. Augustine, Florida. John was not one to remain quiet and retired, so they returned to the Albany area. He had been a resident of the Blooming Grove Senior Housing and most recently The Pines at Heartwood in Troy, NY. John loved sports but was passionate about soccer having played himself for many years and then coaching. He was the Boys JV & Varsity Coach for LaSalle Institute from 1976 – 1986. He also coached at Hudson Valley CC from 1986 – 1988. He participated in many bowling leagues over the years and was an off-ice official and season ticket holder for many years for RPI Hockey. In later years he became an off-ice official for both the men’s and women’s hockey programs. He was a die-hard Aston Villa fan. John was also an avid gardener and always offered a hand or advice. John was a great storyteller and his sense of humor will be greatly missed. John was the beloved husband of Lilian who died in 2012, greatly loved father of John C. Matthews (Fiancé Lisa Nardini) of Latham, Adam (Heidi) Matthews of Marlborough, MA and Ryan (Donna) Matthews of Valley Falls.; cherished grandfather of Tracey (Kelvin) Schoonmaker, Tara Matthews, Brenden (Jillian) Matthews, Courtney Matthews, Samantha (Spencer) Lasker, Nicole Matthews, and great-grandfather of Noah, Jack, Hunter and Olivia. Relatives and friends are invited to calling hours on Thursday, July 30th, from 1 to 3 p.m. at the Morris - Stebbins - Miner & Sanvidge Funeral Home, 312 Hoosick St., Troy. A service will follow the calling hours and friends are invited to stay. Per current guidelines, anyone attending must wear a facial covering (mask) and adhere to the six foot social distancing requirements. Please understand that a maximum of 35 persons may be present in the funeral home at a time. If waiting in line outside, please be sure to observe the social distancing and facial covering requirements as well. Hand sanitizer will be made available at the funeral home. In lieu of flowers, the family asks that donations be made in John’s name to: National Kidney Foundation. Please feel free to use the tabs on this web page to share a memory or offer your condolences.