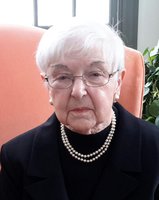 Helene E. Greenwood, 90, of Clifton Park, beloved wife of 65 years of the late John W. Greenwood of Clifton Park, entered into eternal life on Tuesday, July 28, 2020. Born in Montague, MA, she was the daughter of the late Raymond Vincent and Isabel Eva Reed Carter and was a graduate of Regional High School, Springfield, NJ. Upon graduation Helene accepted a position as Governess to a family in Robesonia (Reading), PA. Later in 1949, Helene moved to Westfield, NJ, and became Manager of a children’s clothing store. Married to husband John W. Greenwood in 1951, they moved to Germany for two years during the Korean Conflict as John filled a military commitment. Upon completion of John’s service in the U.S. Army, they moved to Cleveland, OH, in 1954, and later to North Wales, PA (Philadelphia area) in 1960. While in North Wales, Helene was involved in local charities to include Superintendent of Christian Education at her local church for grades 1 through 12. Next the Greenwood’s moved to Clifton Park, NY, in 1969, and again Helene was involved in many local charities and also served as a nurse helper at the VA hospital in Albany, NY. Helene then became involved with the following organizations each of which she served as President: PTA, Shenendehowa School Board, Saratoga County BOCES, and Chapter T of PEO. During those many years of community service, the phone rang often at the house, and we always knew it was probably for Helene. Last but not least, she was also one of the founding Mothers and Fathers of the Shenendehowa Football League running the concession stand in the early years from the trunk of her car. Helene was devoted to her Family and her home. Always open to a good game of bridge. Beloved wife of the late John W. Greenwood; devoted mother of Carter (and wife Sandy) Greenwood of Havre de Grace, MD, and Scott (and wife Dana) Greenwood of Cheney, WA; cherished grandmother (Nana) of Jacob Greenwood; also survived by several nieces and nephews, her sister Lorraine Carter Apple, and predeceased by her other sisters, Esther and Doris. Funeral will be held on Friday at 11:30 am at the Gordon C. Emerick Funeral Home, 1550 Rte. 9, Clifton Park, NY 12065. Relatives and friends are invited and may call at the funeral home on Thursday from 3-5 pm. Due to the restrictions of Covid-19, facial coverings and social distancing will be required. Interment will be held at the convenience of the family in the Gerald B.H. Solomon Saratoga National Cemetery, Schuylerville, NY. Those desiring, may make memorial contributions to the charity of their choice, in memory of Helen E. Greenwood.