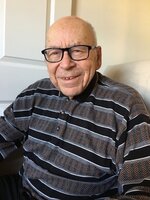 Salvatore A. Piazza, 93, of Cohoes, formerly of Biscayne Blvd. in Troy, peacefully entered into eternal life on Tuesday, September 20, 2022 at the Eddy Village Green.

Born in Troy, he was the son of the Antonio and Rose Arrigo Piazza and the beloved husband of the late Gloria Lemieux Piazza. He was a graduate of Troy High School and received his Honorable Discharge for his active duty service in the U.S. Army from 1950-1952.

Mr. Piazza retired from Niagara Mohawk in Albany where he worked in Production.

He was a communicant of St. Augustine’s Church in Lansingburgh, an avid fan of the New York Yankees and New York Giants, was an excellent cook, loved to putter around the house and most of all, was a dedicated family man.

Relatives and friends are invited to the Mass of Christian Burial which will be celebrated on Monday, September 26, at 10:00 A.M. at St. Augustine’s Church, Lansingburgh.

Interment with military honors will be held in St. John’s Cemetery, Lansingburgh.

Those desiring, may make memorial contributions to the Alzheimer’s Foundation of America, 322 Eight Avenue, 7th floor, New York, NY 10001 or to the American Kidney Foundation, 11921 Rockville Pike, Suite 300, Rockville, MD 20852, in memory of Salvatore A. Piazza.

Please feel free to offer you on-line Condolences by using that tab on this website.