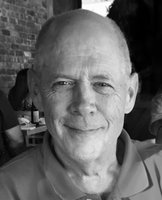 John Kevin Gebert, M.D., of Halfmoon, New York, husband of Marlene A. (DeBonis) Gebert, was relieved of his battle with glioblastoma in the early hours of Monday, July 22, 2019, surrounded by the loving arms of his family.

Known by his family, friends and colleagues as “Kevin,” Dr. Gebert was a second generation physician. Born in Milwaukee, WI, he was the son of the late John J. Gebert, Jr., M.D. and the late Claire M. (Lynn) Gebert. Raised in Defreestville, NY, he was a graduate of St. Joseph’s School in Rensselaer and La Salle Institute in Troy. He received his bachelor’s degree from Siena College in Loudonville, NY and his medical degree from Georgetown University School of Medicine in Washington, D.C. He served his internship at Tufts-New England Medical Center in Boston, MA, where he perfected his suturing skills by tying flies for fishing. For the next two years he was the general medical officer for the U.S. Public Health Service at Barnes-Kasson Hospital, where he delivered general health care to the underserved population of Susquehanna, PA. He completed his residency in general surgery at Geisinger Medical Center in Danville, PA where he honed not only his surgical skills but also learned how to restore an old farmhouse. He was always interested in the latest electronic gadgetry and video games, activities that unwittingly helped prepare him for performing laparoscopic and robotic surgeries, which he thoroughly enjoyed.

After moving back to Troy, he worked in the office of Dr. David Coletti, where he found someone whom he could confide in and speak freely about all aspects of surgery. After starting his own solo practice in 1984, he eventually formed Capital District Surgical Associates with Dr. Yusef Silk, Dr. Edward Hannan, and later with Dr. Greg Fields. In 2011, they joined Northeast Health Physicians Network. A Fellow of the American College of Surgeons and Northeast Health Foundation’s Founders’ Award recipient, Dr. Gebert served as Chief of Surgery at both St. Mary’s and Samaritan hospitals, as president of the medical staff at Samaritan Hospital and as chairman of multiple committees at both hospitals, including the Cancer Committee at Samaritan. He retired from surgical practice in 2014. Dr. Gebert was the initiating force behind bringing the National Surgical Quality Improvement Project (NSQIP) of the American College of Surgeons to Samaritan Hospital and continued to serve as the surgical champion for the program until his diagnosis.

When not in the operating room, Dr. Gebert loved to downhill ski and to sail on Saratoga Lake. He didn’t need someone to accompany him; he enjoyed the solitude of the trails and the lake. He was a previous member of the Ancient Order of Hibernians Pipe Band and was particularly proud of having played the bagpipes in Ireland on St. Patrick’s Day. He was a member of the Mohawk Hudson Region Sports Car Club of America, where he raced his much loved Miata. He enjoyed golfing with buddies Tom P., Bruce C. and Tom S. and fly fishing. The Outer Banks of NC was his favorite vacation spot to visit and relax, and it was there that he, Marlene and their best friends eventually bought and sold the notorious “Money Pit.” Dr. Gebert was a charter member of the LSI ‘68 Alumni Bocce Crew. Despite being the only non-Italian on the team, he enjoyed the competition and socializing with classmates on Thursday evenings at The Market in South Troy. In recent years, he was introduced to Premier League Soccer by his son-in-law Nathan, and picked Manchester City as the team to beat, following the club with enthusiasm as they won the Premier League for the past two years in a row.

Dr. Gebert’s love of surgery was eclipsed only by his love for his family. He was the much loved husband of Marlene for almost forty-seven years; devoted father of Megan A. Wilson (Nathan) of Watervliet, and Andrew J. Gebert (Juliette) of Guilderland, loving brother of Claire Lynn Gebert, Paul Gebert, and Kent Gebert, Esq. (Maureen) all of Schenectady; Bryan Gebert of Albany and Mary Kay Maki of Houston, TX, also survived by nieces and nephews, grandnieces and nephews, cousins, and the family canine companion, his “granddog,” Clyde.

Dr. Gebert’s family wishes to express their sincere gratitude to all the nurses and aides who cared for Kevin during his illness, especially Stacy, Shirley, Olivia, Angie, Rhonda, Tara and Charmaine, who became like family to them.

Those desiring may make memorial contributions to Doctors Without Borders USA, the National Brain Tumor Society or the charity of their choice, in memory of J. Kevin Gebert, M.D.

Please feel free to express your on-line condolences by using the "Add Condolence" tab below.