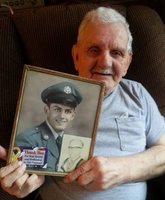 Leonard J. Lussier, 88 of Grooms Road died on Friday Dec. 27, 2019 at his home in the loving care of his family. He was born on Feb. 25, 1931 in Cohoes and was the son of the late Alfred J. and Marie A. Petit Lussier. Leonard was educated in Cohoes and the single room school house in Vischer Ferry. He served in the US Airforce honorably from 1951-1955. He was the beloved husband of the late Winnona Williamson Lussier, who died on July 12, 2017. They were married on July 1, 1956. Leonard retired in 2005 from Mack Trucks in Albany where he had been a Diesel Mechanic for 50 years. He enjoyed restoring Ford tractors and gardening. Leonard had been a communicant of St. Mary's Church in Crescent. He is the devoted father of Brenda (Jim) Cleary of Lakeland, FL, Robert "Rob" Lussier of Clifton Park, NY and the late Donald Lussier; brother of Joseph Lussier of Clifton Park, NY and the late Bernadette Lussier, Victor Lussier, Arthur Lussier and Francis Lussier; cherished grandfather of Kristen, Ryan and Austin Cleary and great grandfather of Brianna, Conner, Cason and Maizie; also survived by several nieces and nephews. Calling hours will be held on Friday Jan. 3, 2020 from 10-12 noon in the Gordon C. Emerick Funeral Home, 1550 Rt. 9 Clifton Park, NY 12065 with a funeral service at noon in the funeral home. Interment will be in St. Joseph's Cemetery, Waterford, NY. Memorial contributions may be made to the Clifton Park-Halfmoon Emergency Corps. 15 Crossing Blvd. Clifton Park, NY 12065.