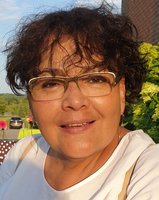 Sandra Gonzalez, 55, of Schuyler Court died on Thursday Jan. 2, 2020 at Ellis Hospital in Schenectady after being stricken at home. She was born Veracruz Mexico and was daughter of the late Arturo and Petra Cazarin Calvo. She was educated in the Mexican School system and was the beloved wife of Francisco J. Gonzalez, whom she married on Feb. 14, 1984. She came to the United States first locating in San Diego, CA, the New Mexico and the last seven years here in Halfmoon, NY. While in New Mexico, she had been a manager at Office Depot. The most important thing to Sandra was being a mother and caring for her son Tony. She is the devoted mother of Anthony Kendall “Tony” Gonzalez of Halfmoon, NY; sister of Maria Juana Bockstatt of Switzerland; also survived by a nephew, Rodrigo Calvo. Calling hours will be from 3-5 pm Sunday in the Gordon C. Emerick Funeral Home, 1550 Rt. 9 Clifton Park, NY 12065.