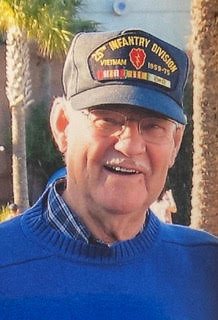 Edward F. O’Brien, 94, of Coburg Village and former Halfmoon and Capital District resident died on March 24, 2021.  He was born in Albany, NY on Jan. 3, 1927 and was the son of the late George P. and Mary C. Fahy O’Brien.  He was a graduate of St. Anne’s Academy in Albany, class of 1944. Ed’s commitment to serving his country in the U.S. Army earned him a Bronze Star with 2 OLCs for valor and two Meritorious Service Medals for heroic action in Vietnam.  He also served with the occupation forces in Italy during WW II.  He retired in 1987 as a Lieutenant Colonel. Ed had also been a letter carrier for the United States Postal Service for many years, and was a proud member of NALC for over 70 years.

Most recently, he lived at Coburg Village where he was socially active and a member of the singing group The Choraleers.  He had a great sense of humor and was very interested in military history. His Irish eyes were always smiling, and he had a repertoire of Irish jokes for anyone who cared to listen (and even for those who didn’t!)! He didn’t like good byes, the length of his phone calls was legendary. Most important to Ed, though, was the time he spent with family.

He was the beloved husband of the late Lt. Colonel Rosa Lee Paul O’Brien who died on Nov. 5, 2014. Ed was predeceased by all his siblings, John (Jack) G.J. O’Brien, George F. O’Brien, Margaret M. Leisenfelder, and Mary Joanne O’Brien. He lost his brother Jack in Northern Europe during WWII. His remains were never recovered.

Inurnment with Military Honors will be held on Tuesday, May 25, 2021 at 11:00 a.m. at the Gerald BH Solomon Saratoga National Cemetery where he will be laid to rest next to his beloved wife, Rosa.

In lieu of flowers, a remembrance may be directed to The Wounded Warrior Project.

To send flowers to the family or plant a tree in memory of Edward O'Brien, please visit Tribute Store
Tuesday
25
May

The inurnment will be announced in the future