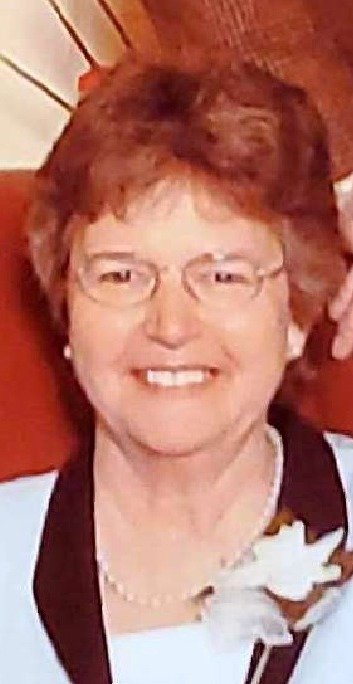 Obituary of Patricia A. Simpson

Patricia Ann Simpson, 85, of Crown Point, Ballston Lake, died on Friday April 30, 2021 at Schuyler Ridge Residential Health Care Center in Clifton Park after a long illness. She was born Dec. 28, 1935 in Schenectady, NY and was the daughter of the late George and Tina Morini Hogan. Pat was a graduate of Mont Pleasant High School, Class of 1953, and Russell Sage

College where she received her degree as a registered nurse. In those earlier years, Pat was the nurse in her former husband's medical practice, the late Dr. Donald L. Hinman,  in Jonesville, NY.  She had been an active member of Jonesville United Methodist Church and had served as their choir director for many years. Pat went on to become co-owner and Inn Keeper at Green Trails Inn in Brookfield, VT with her late husband, Peter D. Simpson, who just died on March 23rd. of this year. She had been a volunteer reader for the blind on a Capital District radio station and also worked for the late Joseph E. Mastrianni, assisting low-income families into affordable housing. Most of all, Pat had a great and abiding love for her family, and especially enjoyed cooking and entertaining them on every holiday and birthday. She took great pride in all her children’s and grandchildren’s accomplishments, attending unlimited sports events, concerts, school plays, dance competitions and award ceremonies. Pat was the beloved wife for 38 years to the late Peter D. Simpson, her devoted caretaker, and she was called up to be reunited with him on what would have been his 80th birthday. She was devoted to her children Malcolm (Laura) Hinman of Jonesville, Jami (Kimberley) Hinman of Ballston Spa, Madge Hinman Morrissey of Clifton Park, Donald Hinman of Dunkirk, Daniel (Tammy) Hinman of Ballston Spa and the late Joel David Hinman; and to Peter’s children Kirsten (Paul) Freeborne of Springfield, VA and Leigh Simpson (Abdellatif Naji) of Alexandria, VA;  sister of Arlene (Michael) Brick of E. Syracuse and Linda VanSchaack of Schenectady; grandmother and “Nonnie” to Sarah, Joel, Jesse, Caroline, Tyler, Aaron and Coleman Hinman, Jenna and Maddie Morrissey, Mitchell and Samuel Freeborne, and Marjan, Sarah and Adam Naji. She was also survived by many nieces and nephews.

A memorial service will be held at a later time to be announced.

Interment will be in Jonesville Cemetery, Jonesville, NY. Memorial contributions may be

made to Alzheimer's Foundation of America. (www.alzfdn.org)

To send flowers to the family or plant a tree in memory of Patricia Simpson, please visit Tribute Store

A memorial service will be held at a time in the future.

Share Your Memory of
Patricia
Upload Your Memory View All Memories
Be the first to upload a memory!
Share A Memory
Send Flowers