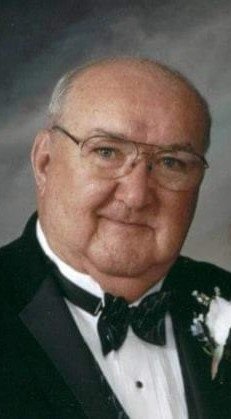 Ronald Joseph Bussing, 84, of Malta Ave. died on Tuesday May 28, 2019 at his residence.  He was born on Oct. 22, 1934 in Greenwich, NY and was the son of the late David Henry and Hattie McNeil Bussing.  Ron was a graduate of Mechanicville High School.  He was the beloved husband of the late Anna Louise Fitch Bussing, whom he married on July 4, 1956.  In 1953 he became  a member of the Army “Old Guard” Company E, 3rd. Infantry Regiment at Arlington National Cemetery for many years and served with the US Army during the Korean Conflict.  He retired from Saratoga County where he was a material and logistics coordinator, working with the county for over 35 years.  He was an avid sportsman who enjoyed hunting, fishing and camping.  He had a special interest in Railroad modeling and known to be a hobby seeker.  He traveled with his wife to casino’s and liked a good game of chance.  Ron was a well known ham operator, call signal being WA2VNS.  He had been a member of the Mechanicville United Methodist Church and the Ballston Spa United Methodist Church.

Calling hours will be from 2-4 pm Sunday in the funeral home.

Interment will be in Memory Gardens, Colonie, NY

To send flowers to the family or plant a tree in memory of Ronald Bussing, please visit Tribute Store
Sunday
2
June

Share Your Memory of
Ronald
Upload Your Memory View All Memories
Be the first to upload a memory!
Share A Memory
Send Flowers