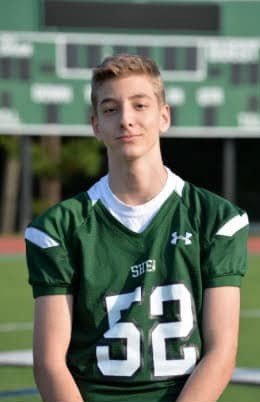 Born in Niskayuna, NY, Garrett is the beloved son of Lance W. Meeson and Laura A. (Merwitz) Meeson. Garrett was a rising Sophomore at Shenendehowa High School in Clifton Park where he would play JV Football this season.

Garrett was known by all, standing above the crowd not only in physical stature, but by the size of his heart, compassion for others, and the ability to light up the room with his infectious smile and wonderful sense of humor.  Garrett especially loved his brother, Lance Myles Meeson, whom he admired and looked up to every minute of every day. Their relationship was truly special to behold.

Garrett had an amazing fashion sense and loved wearing clothes that reflected his personality, often changing the color of his hair to make a statement.  We called him G Money as he was a superstar in the making.  He also enjoyed working out, pushing himself while encouraging others to push themselves to reach new heights. He also loved listening to music from Billie Eilish and XXXTentacion.  Garrett was an avid fan of Doctor Who, Shark Tank, Mythbusters, and Forged in Fire.  He would often listen to podcasts on business and science.  He also loved watching Will Ferrell movies, and the Marvel Comics series.  Garrett was also probably the world’s greatest player of Clue, consistently outsmarting his family.  Beloved son of Lance and Laura, devoted brother of Lance Myles Meeson, adored grandson of Robert (Sheila) Meeson, the late Carla Nesbitt and the late Madlyn Reid,  cherished great grandson of Eleanor Meeson (late, Robert), loving nephew of Melanie Meeson (Scott Peconi), Robert Meeson, III, Robert LaCross (Ana), Blair Meeson, David Merwitz and the late Victoria Nesbitt, coolest cousin of Alexandra Rinehimer, Bobby LaCross, Mikayla LaCross, Christopher Merwitz and Tyler Merwitz.

Garrett’s family would like to extend their sincere gratitude to Rodney Gwiazdowski for his courage and valor in our time of need, as well as the support of our entire community for all the love they have bestowed upon our family.  Every thought, every prayer, makes a difference.

In lieu of flowers, a memorial contribution is encouraged to keep Garrett’s legacy alive at https://www.gofundme.com/f/garretts-memory-fund

To send flowers to the family or plant a tree in memory of Garrett Meeson, please visit Tribute Store
Monday
15
July

Share Your Memory of
Garrett
Upload Your Memory View All Memories
Be the first to upload a memory!
Share A Memory
Send Flowers